James Baldwin once said, “In America I was free only in battle, never free to rest.” 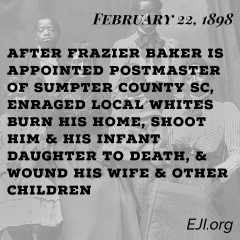 In this final week, we turn toward the multitudinous nooks, crannies, corners and spaces where racism hides. We look at  the lifelong struggle to gamble with your life at a table with a stacked deck, how systemic racism and prejudice affects everything we do, including health care, science, education, getting a job

We also discuss how Black people work to bolster their minds and hearts, to learn how to succeed in the face of systemic oppression, in the face of ambivalence and apathy of their fellow countrymen. They know how to survive in the face of persistent aggression, whether in the form of waves or streams, or in the forms of macro- and micro-aggressions.

This leads us to a new feature for this last week of Black History Month: we’ll be sharing a vocabulary word every day to help you come to conversations about race feeling more prepared and aware of the terminology. And today’s term is microaggression.

A macroaggression is a major show of force, such as physical assault or a direct racial slur, whereas a microaggression is a smaller and more insidious comment or action. Over the course of a lifetime, these aggressions accumulate, and incur stress, making them just as meaningful and detrimental.

It’s crossing over to the other side of the street when you see a Black person walking toward you. It’s asking to touch someone’s hair, like they are your personal plaything. It’s comments that undermine a person’s humanity. This kind of indirect or subtle discrimination can even be couched as a compliment: “You’re really pretty, for a dark-skinned girl.” “You’re so eloquent. You don’t talk like a Black person.”

Microggressions are the trickles and drops of bias and uncaring that fill lakes of pain. Black people have learned how to swim in these lakes, but it gets tiring. Simba Rinyowa discusses how they matter — their impact on individuals and what they mean for interpersonal tensions in America.

While we’ve typically placed long reads on Saturdays, we’re breaking the mold and adding in a longer article today. Over the course of the week, consider this piece about living with racial battle fatigue by Dionne Irving, who shares the toll taken by constant battle.

We close today with Dominique Christina’s powerful spoken word poetry about the story of Emmett Till and the days before he became famous. She implores her son to remember the story. Every day, we are reminded  of the risks we run merely by living as we are, but we must remain unapologetically Black – even in the face of micro- and macro-aggressions that assault us daily.

Dominique implores her son to live fully, to forever be unapologetically Black.