As a Mother Jones article summarizes: After Florida had joined the union, it put felony disenfranchisement into its new constitution to permanently take away the voting rights of the formerly enslaved citizens. It also expanded “the number of crimes that would count as felonies and created a system of county criminal courts intended to convict African Americans of crimes such as ‘larceny, malicious mischief, vagrancy, and all offences against Religion, Chastity, Morality, and Decency.’”

More recently, the government got tough on crime and started a war on drugs, disproportionately targeting, sentencing, and imprisoning people of color. By 2018, more than 20 percent of voting-age Blacks couldn’t cast a ballot because of the felony disenfranchisement law.

But during the 2018 midterms, 64 percent of Florida voters agreed that felons should have a path back to voting. Amendment 4 passed. The result was monumental: it gave 1.4 million people the right to participate in democracy once all the conditions of their sentences were fulfilled – the largest expansion of voting rights since lowering the voting age from 21 to 18 in 1971.

But it’s all better now, thanks to Amendment 4.

No, not really, but we appreciate your optimism. It’s a work in progress. The amendment did pass, and that’s a big deal. In response to Amendment 4, the state’s Republican Secretary of State Ken Detzner resisted implementation of the measure, saying that the language was unclear and needed to be clarified by the state legislature. (Side note: the legislature is dominated by Republicans). (Other side note: Detzner was part of a “fundamentally flawed” voter purge.) (Final side note: Detzner was succeeded by Michael Ertel as Secretary of State, who resigned in January after photos were released of him wearing blackface to a Halloween party, posing as a Hurricane Katrina victim.)

In December, Reuters reported that “Governor-elect Ron DeSantis, a Republican and critic of the measure known as Amendment 4, said the Republican-controlled state legislature must first pass a law to implement its changes.”

And last week, Florida state House members began looking at “ambiguities” in the law before the legislative session starts on March 5. (Back in December, former head of the Florida ACLU and Amendment 4 champion Howard Simon spoke with Mother Jones, who said he predicted that the state legislature “might try to muddy the waters. Legislation could bog down rights restoration or sow enough confusion that some ex-felons are deterred from registering.”)

The issues in the field seem much more practical – like the fact that “no single database shows whether felons have completed all terms of their sentences, and forms don’t exist to show whether felons have met all the conditions imposed by judges.” There are billions of records, many of them only on paper, microfilm, or microfiche.

Also disturbing is the 2008 finding by the Brennan Center and ACLU that “Across the country there is persistent confusion among election officials about their state’s felony disenfranchisement policies. Election officials receive little or no training on these laws, and there is little or no coordination or communication between election offices and the criminal justice system. These factors, coupled with complex laws and complicated registration procedures, result in the mass dissemination of inaccurate and misleading information, which in turn leads to the de facto disenfranchisement of untold hundreds of thousands of eligible would-be voters throughout the country.”

There are currently two states that allow those in prison to vote, and two states that have permanent disenfranchisement for all people with felony convictions. Know which ones? 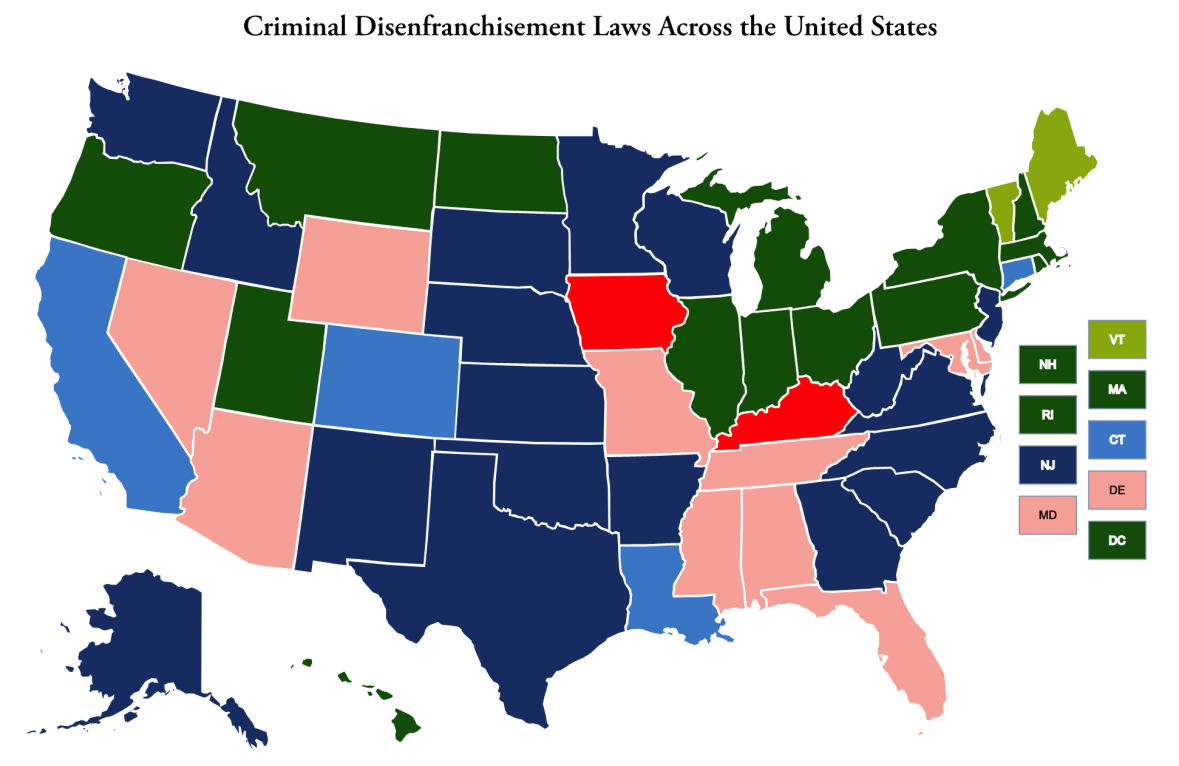 Vermont and Maine allow currently incarcerated individuals to vote. Congrats to Iowa and Kentucky (some people also include Virginia, but it’s complicated) for picking up the disenfranchisement mantle from Florida. But people in both states are working toward their own versions of Amendment 4. Many Iowans seem to support a similar measure proposed by the governor, Kim Reynolds. On Feb. 15, Kentucky state senator Morgan McGarvey submitted a bill to the state legislature that would automatically restore voting rights for most convicted felons.

There’s still a long way to go. We’ve taken the first step, but there’s still a lot of work to be done. For many of us, this will mean doing more research on the path to voting rights in your state. What is the incarceration rate in your state? The demographic breakdown? Who is being denied access to vote, and why? How are things changing? (For example, in March 2018, Chicago allowed inmates to vote while incarcerated, making it their first in-person jail voting operation). And with voting rights for prisoners and beyond, what organizations are doing good? Support them.