Could you describe the worst 5 minutes of your life? Something you did that you wished you could undo? What if the rest of your life, all people wanted to talk about was that – you’d become nothing but the thing you’d done. When the only way to deal with the crime was to try and rob you of your humanity, while society itself brays for retribution, for punishment– to make their pain less by watching you suffer.

It sometimes feels that desire for ‘retribution’ is so deeply ingrained in society that the idea of restorative justice is portrayed as some hippie ideal, letting folks just ‘get away with anything’’. And yet, restorative justice brings the power of healing, dealing, and repairing to communities themselves. The broad principles of restorative justice have their roots in the knowledge systems of Indigenous peoples in Canada and Native Americans (some principles of the First Nations and Mohawk Nation are outlined in the International Institute for Restorative Practices), and rely on the fact that crimes are not only about laws, but do damage to communities. These communities are often left broken, without the process of healing and repair offered by the legal system. [As an aside, the recent acquittal of the Saskatchewan farmer accused of shooting Colten Boushie, a First Nations man reminds us that the legal system doesn’t often bring justice in the first place for Indigenous peoples]

For me, the key principle of restorative justice is that the victims, the offender, and their family/community have a role in coming up with a solution that actually benefits the community and repairs the damage. A key principle is that restorative justice is focused on impact to the community and victims. It isn’t merely about reducing impact of the crime on the offender, but rather taking power back to victims and communities that can be robbed of their power twice, once by the crime and once by the response of the law.

That community power, that inclusivity and balance is something that has far-reaching consequences beyond just one experience. This week, Black Lives Matter have been running a nationwide campaign in schools. Restorative justice matters in schools because, surprise surprise, Black kids are far more likely to be expelled than white students, and the cycle of denial, blame and isolation is hard to stop when it is entrenched so early on in childhood. 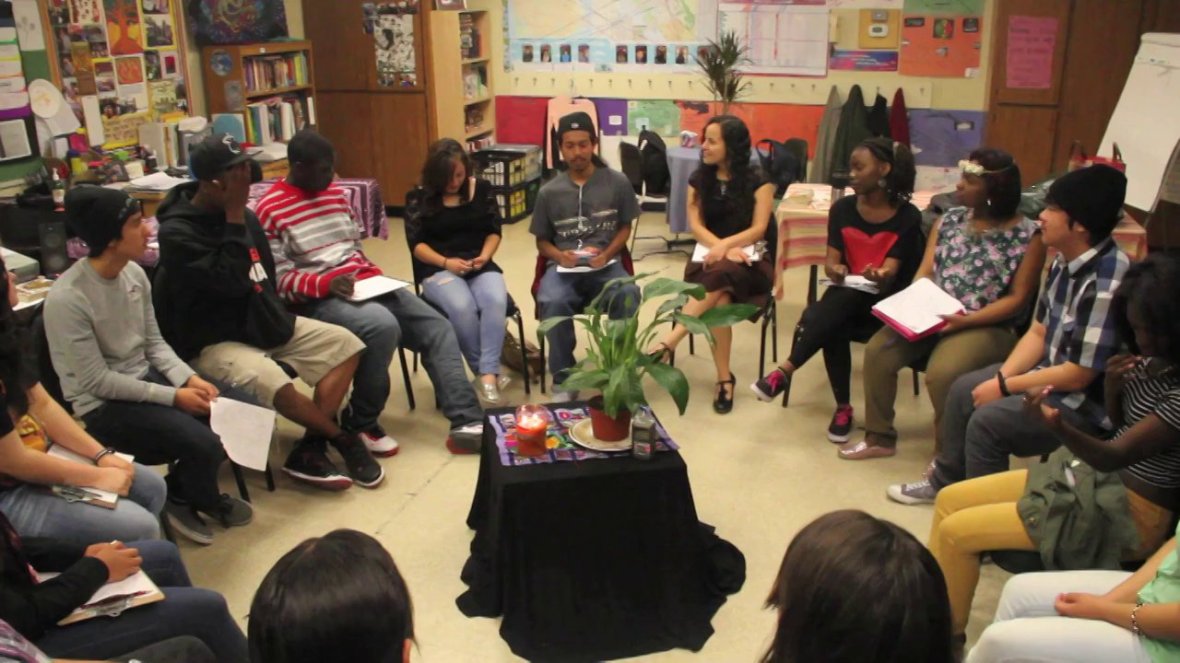 Students sit in a justice circle as part of the Black Lives Matter at Schools effort. Image from https://www.theodysseyonline.com/restorative-justice-in-the-black-lives-matter-movement

Restorative justice approaches are not without criticism. For example South Africa’s Truth and Reconciliation Commission (TRC), has been criticised since it allowed amnesty for offenses, provided the offenders confessed in great detail to the crimes they committed. But it did provide truth first and foremost, and it was about rebuilding communities ravaged by racial violence. As Desmond Tutu said at the opening of the TRC:

We are meant to be a part of the process of the healing of our nation, of our people, all of us, since every South African has to some extent or other been traumatised. We are a wounded people because of the conflict of the past, no matter on which side we stood. We all stand in need of healing. We on the Commission are no superhuman exceptions. We too need forgiving and to forgive. I hope that our churches, mosques, synagogues and temples will be able to provide liturgies for corporate confession and absolution.

The opening of South Africa’s Truth and Reconciliation Commission after the end of Apartheid. Archbishop Desmond Tutu was instrumental in bringing the commission to fruition.

The restorative justice practices that BLM are calling for in the US education system may benefit Black students who are either victims or offenders. But in my mind, there’s a much bigger call for restorative justice and also reconciliation through truth that is needed in America. Unless real conversations (and admission of guilt, rather than just abstraction) happen about the horrors of racism and slavery in the US, it feels like the cycle of denial, abuse and violence will not end.

There are movements towards reconciliation practice happening, and they mostly focus (as they must) on the brutal racial history of the US.

For example, reparations. In 2014’s The Case for Reparations, Ta-Nehisi Coates describes the process by which the nation of Germany came to give reparations to a people whose genocide it caused. Coates compares the moral and cultural maturity of a nation that can do this to the cowardly and willful immaturity of the United States, Though John Conyers has been submitting to Congress each year for nearly 30 years, a bill to merely study reparations, Congress and white America continue to reject the idea.

This country refuses to look at itself in the mirror, refuses to acknowledge what it has done, refuses to engage in any reparative or restorative justices for the most basic and obvious of its crimes. And until it does so, white America, and the nation whose vote it controls, will remain morally immature and unfit for cultural leadership in the world. White America refuses to see a basic truth, much less engage in reconciliation. Reparations in America is not just about money, it’s about really acknowledging that what you did was wrong, and putting weight behind that statement.
But where does the reconciliation start for Freddie Grey? How does Sandra Bland’s community heal? Where do we look for justice (restorative or otherwise) for Michael Brown?  How does restorative justice proceed in communities that are themselves brutalised by the justice system. In South Africa, many of the people who spoke at the TRC were police officers who had beaten and killed Black South Africans during the ‘war-like state’ of Apartheid. But when is the watershed moment for the ongoing violence against Black bodies? Some voices are calling for restorative justice practices in places like Ferguson, many communities have been struggling to heal themselves, rather than having the truth and repaired relationships that restorative justice may allow.