Policies concerning illegal substances (namely, The War on Drugs) have filled prison cells and disproportionately impact people of color in the United States. According to The Sentencing Project, half of the people in federal prisons are serving time for a drug offense, and “African Americans and Latinos constitute 57 percent of people in state prisons for a drug offense, despite the fact that drug use is roughly similar among all racial/ethnic groups.” For a brief history of drug laws, check out this summary by the ACLU or watch this video:

Among the facts laid out by the Drug Policy Alliance:

Think that kind of stereotyping is a thing of the past? Check out this Washington Post article: “Kansas lawmaker says African Americans are more susceptible to drug abuse because of ‘character makeup’ and ‘genetics.’” (Alternatively, if you don’t have a Washington Post account.)

People of color are stereotyped all the time when it comes to drugs. 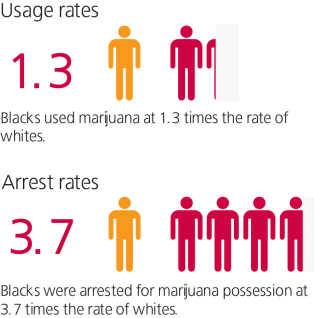 Figure from The Sentencing Project (link to full report in text).

As we discussed yesterday, unequal policing of Black people versus white people leads to worse (often fatal) outcomes for Black people who are literally and figuratively put in the crosshairs of police by a corrupt criminal justice system. While we often think of this violence in terms of assault, either with baton or firearm, violence is also done by bringing people into contact with the incarceration system. For example, in this excellent report on racial disparity by The Sentencing Project, you can see that while marijuana usage is only slightly (1.3x) higher amongst Black Americans, Black people are nearly 4 times more likely to be arrested on drug possession charges. This racial disparity is magnified the further along one looks in the incarceration system: despite the fact that white people make up two-thirds of all drug users, 57% of those incarcerated for drug offenses are people of color. Policies such as stop and frisk are applied disproportionately in neighborhoods with majority Black populations– what would such a policy look like if it had been enforced on Wall Street stockbrokers during the decadent, cocaine-fueled years of 1980s (during which Black people were targeted for crack usage, the exact same compound in its more affordable form), or for that matter, on any number of predominantly white college campuses today?

Drug convictions can wreak havoc beyond just the offense itself: record of a conviction can result in lack of access to employment, and even public assistance. Thus, even a low-level offense can cause those who enter the incarceration system– itself severely racially biased, on numerous levels— to experience long-lasting impacts well beyond the initial offense.

Owners of marijuana businesses by race

Today, the growing legalization of marijuana in states across the US (and country-wide in Canada, as discussed below) brings new opportunities, but also reflects the same ongoing racial disparity. Legalization has, in many places, been accompanied by a boom in related businesses: smoke shops, weed boutiques, and in places where marijuana is merely decriminalized, numerous fancy businesses selling adorable merchandise, from shirts to fresh-pressed juices, wherein one receives drugs as a “gift”. In principle, legalization is good– it at least partially closes one gateway through which many people have entered the incarceration system. However, it is becoming clear that, again, the opportunities legalization presents are not equally accessible to all: many of the new marijuana-related businesses that are springing up are by startup companies, facilitated by apps, which circumvent the need to have a brick-and-mortar storefront. These startup entrepreneurs and developers are, like much of the tech industry, predominantly white. Having already benefited from racism and racial disparity by gaining better access to education, white entrepreneurs are now poised to benefit the most from the exact thing that has imprisoned so many Black and brown people. Black marijuana entrepreneurs describe the fear of seeing how incarceration has impacted their communities as a discouraging factor in being able to take advantage of the new economic opportunities legal marijuana might bring. In some cases, legalization has pushed marijuana entrepreneurs like Andrea Unsworth of StashTwist out of business by creating a greater financial burden; because the legacy of racism is fundamentally tied to lasting economic disparity for Black people, it’s easy to see how even successful Black business owners like Unsworth can be forced to close their doors after years of operation.

Some activists have rightfully positioned this moment in the context of gentrification, where historically Black neighborhoods are not only reshaped with respect to white people’s demand for housing, but wherein the businesses that move in are also owned by white people, even when replicating the informal economy that existed in the neighborhood previously (i.e. the sale of marijuana). In many ways, the burgeoning marijuana business parallels other inequalities in informal economy: whereas Eric Garner was murdered by police after an encounter over his selling loose cigarettes, and Alton Sterling CDs, other informal economy jobs that are mediated by predominantly white-developed and -benefiting technology (e.g. ride-share apps like Uber and Lyft) are not met with similar policing. One pressing question is whether states will choose to release those imprisoned for past offenses that are now no longer considered criminal, such as is being discussed in by state officials in Wisconsin, Colorado, and others. Only time will tell whether states choose to uphold the drug law double standard, or not.

These issues are not limited to the US: this coming summer, marijuana will become legal in Canada. The country is bracing itself for the moment when consumption and sale will become legal, taxed and regulated. Posters are appearing on highway billboards and on student campuses urging folks to drive safe and ‘think of tomorrow’.

The country already is worried that it will be facing a supply crunch when pot becomes legal. As VICE reports in the article below, pot stocks have doubled in the last year alone.

But as highlighted above, while the (majority-white) pot ‘entrepreneurs’ are laughing all the way to the bank, those currently arrested or charged with weed-related crimes are mainly people of color.

Nothing quite like a handy infographic to drive it home:

Of those arrested, Black people were detained for bail hearings at the highest rate.

If you’re about to legalize cannabis, you might think that it would be the ethical thing to do to pardon recent past marijuana convictions. You’d be wrong. It appears that the Public Safety Minister has no intention of relaxing prior convictions, and the government promised to continue to be ‘tough on crime’ (ugh that phrase) during the transition phrase.

And yet, when two Toronto police officers consumed pot edibles believed to have been obtained in a raid of a medical marijuana dispensary while on duty you can’t help but think that they will surprisingly get off lightly. Oh, yeah, right, they’ve not been charged. The are suspended from the police force pending an internal investigation, but they aren’t sweating it in a cell anywhere.

[As an aside, the officers called for assistance from another office who then also slipped and fell in a regular Mr. Bean-style event that was recorded by a dispatcher].

Are we moving in the right direction by decriminalizing drugs? Yes, definitely. But if these moves only serve to support white people and systemic racism, then let’s not pretend it’s for any other reason than profit.